It started a few years ago (almost 10 now) when I decided that instead of spending most of my free time playing video games, I would spend it learning to make them. A few game engines and many years later, I was hard at work with a small team on my own open world first person RPG. I had a runway for about 6 months of development and the plan was to kickstart the game and given any success see the project through to release later this year.

That story came to a quick end when after 30 days our crowdfunding campaign was only able to raise 10% of our goal. After this, the team was disbanded, and I took some time to reflect on everything and come up with a new plan.

The new plan: Originally, the game was intended to be a multiplayer first ARPG with some unique PVPVE features. Without the requisite funding, completing an open world’s worth of content as a single developer seemed nearly impossible, so I decided to go back to the roots, Multiplayer first.

Next thing that I needed to tackle was reducing the length of the game loop. The choice was obvious, a round based shooter, only I wanted to keep the spirit of permanent death that I had gone into the original with.. so I veered away from rounds where players respawn and too a more “counterstrike-like” approach, with some variations.

Rounds are now 110 seconds long. Each team starts on their side of the map, and has a “BUY PHASE.” During the BUY PHASE players can click B and open the Skills menu. Unlike in games like CS or Valorant, players cannot buy weapons in this menu, only abilities. A round is won by eliminating the opposing team or completing the objective (in the current map BAN YOKAI the objective is to destroy or defend the HEARTS OF EARTH).

When a player dies, they do not lose their abilities, but they do lose any other item purchased. Items other than abilities (weapons, upgrades, buffs, passive skills) can only be purchased in the “HIDDEN SHOPS.” One can be found near each team’s spawn (emphasis on “can be found” as it is not that easy to spot them).

Currently the demo is released on Steam and this single developer needs as much testing and suggestions as possible. There are a number of demo abilities but I am super open to any suggestion that anyone may have for abilities, buffs or items. (Pet builds & Necromancy currently in the works.)

If you read this far down, thanks for sticking around, I hope that Karma gives you a break and you find some great success in your life today! 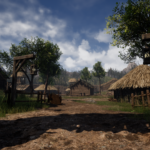